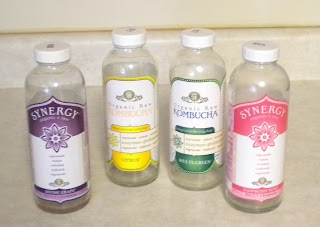 We LOVE GT’s Organic and Raw Kombucha and Synergy!!!!! It is our favorite drink! My husband likes the Multi Green (he is weird like that- loves all things green!) I love the fruity flavors. Raspberry Rush and Grape are my favorite at the moment.
So what is Kombucha? (from GT’s website):
Kombucha is alternately known as a Chinese tea, a plant, or a mushroom. But it’s not really any of these. It’s a living culture of beneficial microorganisms, and in Kombucha’s case, the whole is infinitely greater than the sum of its parts! Our Kombucha is delicately cultured – some liken it to fermentation – for 30 days. During this period, essential nutrients form like active enzymes, viable probiotics, amino acids, antioxidants and polyphenols. All of these combine to create an elixir that immediately works with the body to restore balance and vitality. Kombucha has been used for hundreds of years throughout the world as a daily health tonic. The culture resembles a light brown, tough, gelatinous disk—and because it’s a living, growing entity, it can regenerate and create new cultures with every batch. In fact, GT’s Kombucha and Synergy are made from Kombucha cultures that are descendants of the original culture GT grew to create his first bottles.

The story behind the bottle (also from their website):

In 1995, Millennium Products founder GT Dave’s life came crashing down when he heard that his mother had just been diagnosed with a highly aggressive form of breast cancer. After a week of emotional turmoil, he was relieved to find out that her breast cancer had not spread and that the pungent tasting cultured tea that she had been drinking was part of the reason why.
GT was touched by how Kombucha had helped his mom and was inspired to begin making it from the kitchen of his house. Being only a teenager he had no business plan, just a desire to share this gift with anybody who could benefit from it.
Fast forward nearly 10 years. GT’s Kombucha has grown from its humble beginnings, where GT would hand-deliver his just-bottled Kombucha to local health food stores, to a full-fledged company that makes over a dozen different varieties of Kombucha products distributed throughout most of the U.S. Although the company has experienced some incredible growth, GT remains committed to expanding the company gradually and organically, never sacrificing quality for the sake of profits.

Kombucha will be a regular part of our diets now- we are hooked! Thank you GT’s!